Since the time of the first conquest of Kilimanjaro in 1889 a number of routes of various levels of complexity were paved: semi-wild and well-equipped, for beginners and more skillful climbers, as well as such that don’t require additional time for altitude acclimatization. Marangu Route is acknowledged as the oldest and the most popular itinerary on Kilimanjaro, followed by almost 90% of climbers to  reach the peak. It’s the only  path among 7 official routes (Marangu, Lemosho, Machame, Northern Сircuit, Rongai, Umbwe), featuring camps for overnight stops, equipped with electricity, sanitary conveniences, life stations and canteens. The Marangu Route is internationally referred to as the Kilimanjaro Coca Cola route.The name appeared through a fault or virtue of careless tourists, who left litter on the roadsides, mostly plastic bottles. Currently, the paths are cleaned of litter and lain with broken stone. Climbing Kilimanjaro is possible all year round, but the periods from June to the end of October or from mid December to mid March are considered to be the best periods.

Description of the Route

The Marangu Route passes through a wide pathway first going through a forest, then following large picturesque slopes; at the highest altitudes the route follows Kilimanjaro’s rocky volcanic neck, and the final passage stretches along the rim of the crater. The route by itself is very good, and one can hardly lose way. Another advantage is the interesting company of other trackers who come here from all over the world. The Marangu Route opens up an excellent chance to behold the wild nature, as well as to admire the views of Mavenzi –  the second peak of Kilimanjaro.

The camp is located at the altitude of 2727 m above sea level and it is the first stop on the way of climbing Kilimanjaro. The camp constitutes wooden huts each of which houses up to 5 people. The camp is intended for 60 people. It features toilets, water (cold and hot), canteen, protection from the attacks of wild animals, excursions with companions.

Khorombo Hut (3720m) is a small wooden cabin, built in the form of the letter “A”. the cabins are exactly the same as in the Mandara Hut, with the only difference that these are more spacious, housing up to 120 people. This halting station is used both during the ascent and during the descend, so that it is usually full of climbers. The open air hut is located on a site, covered with unusual vegetation and high grass. From here the climbers can enjoy a breathtaking view on the peaks of Kibo and Mavenzi. It’s the ideal place to admire the sun rising from beneath the clouds and the enchanting evening sunset. 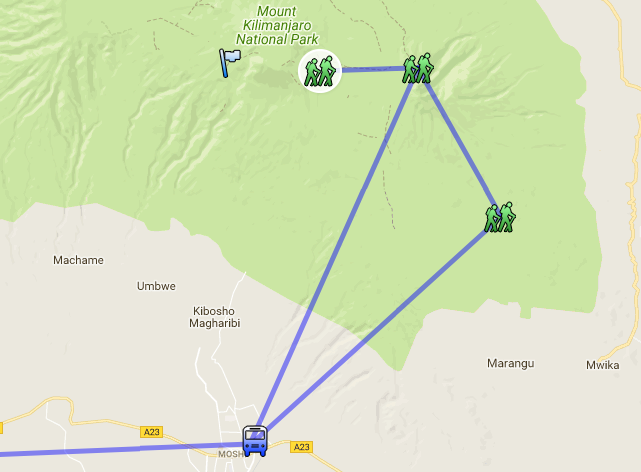 The camp is located at the altitude of 4750 m above sea level and is the third stop on the route, leading to the summit of Kilimanjaro. The camp contains 4 stone constructions, housing up to 12 persons and another one with a capacity of 10 persons. The place is equipped with restrooms, an area for dinner, as well as protection from wild beasts and  fresh water.

According to success rate data, published by the Kilimanjaro National Park,

the Marangu route success rate is 50% or even lower. The reason to this is that many climbers opt for the short 5 day Marangu route, and do not take enough time for proper acclimatization. If you are determined to reach the summit of Kilimanjaro following the Marangu route, then it would be wise to heed the advice of experienced operators and opt for 6 day tours (6 day Marangu route). This will increase your chances of reaching the highest peak of Africa through the most popular Marangu route (Coca Cola route).